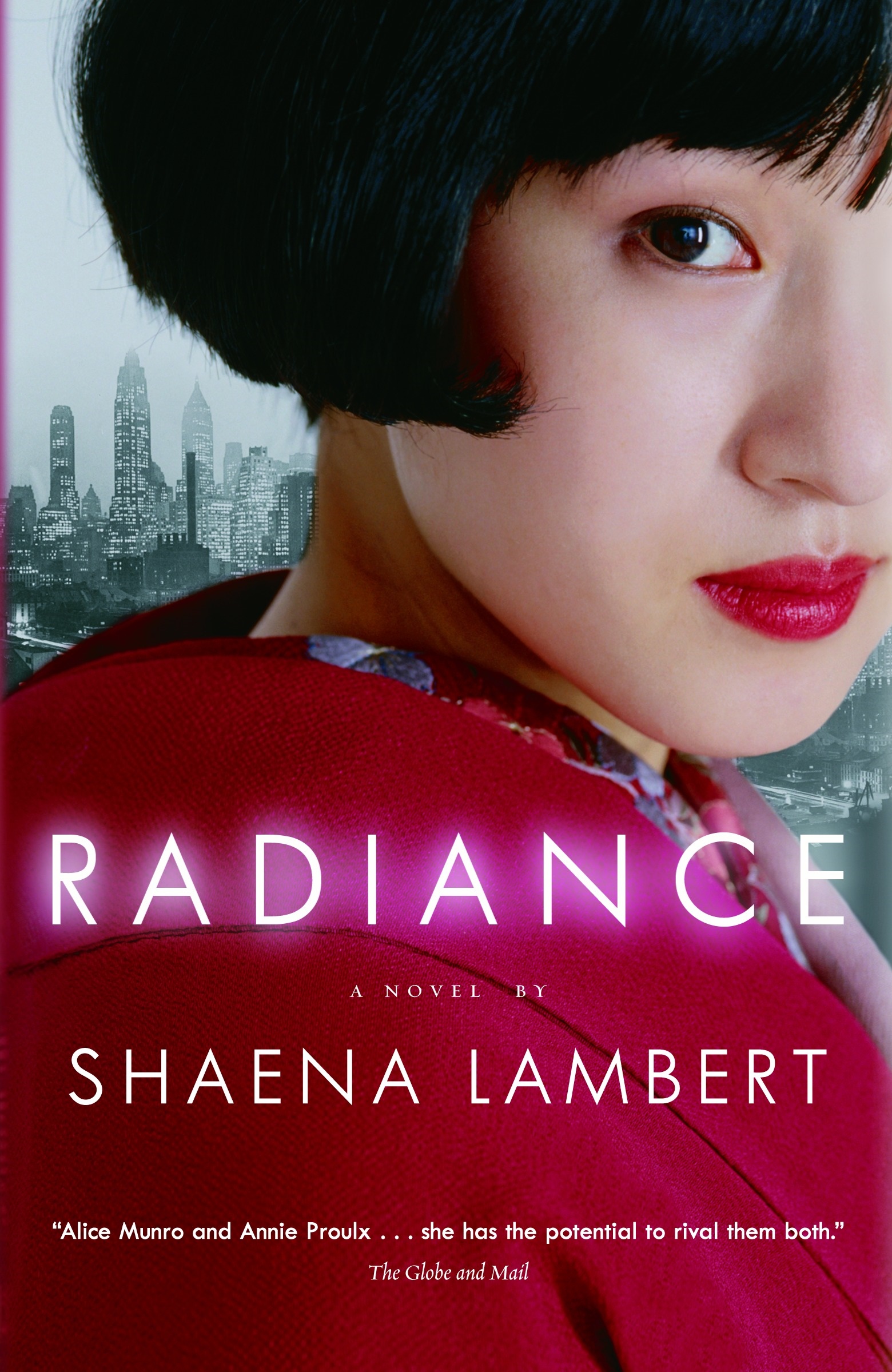 Keiko disembarks from a plane on a New York airstrip in March 1952, turning one horribly scarred cheek away from the pop and flare of news photographers’ cameras. An eighteen-year-old survivor of the atomic blast that destroyed Hiroshima and killed the people she loved best, Keiko has been chosen from hundreds to undergo sponsored treatments for her face. On the tarmac, waiting nervously, is Daisy, a childless housewife who is to take care of the girl in her suburban Long Island home.

In the storytelling tradition of Rose Tremain and J. G. Ballard, set against the backdrop of McCarthyism and an America appalled and entranced by its own destructive power, Radiance is an astonishing first novel about a kind of intimacy that can only lead to betrayal.

—from the Virago book jacket

Selected as a “Best book of the year” by the Globe and Mail, Quill and Quire, New Zealand-Star Herald and New Zealand Listener.

“It must be something in the water up there, but Canadian women writers are a remarkable breed — names like Alice Munro, Margaret Atwood and Carol Shields offer a guarantee of a good story well told. And now there’s a new name to add the pantheon: Shaena Lambert, whose debut novel, Radiance, is as compelling, as thoughtful and as fundamentally readable as those of her better-known sisters. It is a mark of Lambert’s skill as a writer that I wept. And it’s entirely possible that you will too”

—The Independent on Sunday

“…A marvelous feat of imagining…Radiance is a novel about the personal life, set in a time now far gone, but with, of course, large implications for our idiotic and ever more dangerous present. In fact, Lambert writes with wonderful authority and audacity about a time she isn’t old enough to have lived through… (Lambert’s) first novel is a healthy indication of a fine, wayfaring imagination. I look forward happily to all the journeys ahead.”

—Richard Bausch, The Globe and Mail

“This beautifully written novel captures the essence of Fifties America without striving for effect. Lambert, who has published an acclaimed collection of short stories, adds to Canada’s reputation for nurturing its literary writers”

“Lambert’s writing, like Keiko herself, is detached, cool and compelling”

“The emerging lawn-lined suburbs of 1950s America Shaena Lambert describes in her debut novel Radiance are familiar – rendered by contemporary chroniclers such as Richard Yates. Though Lambert was born a decade later in Canada, this is no watery pastiche. She skilfully threads her characters’ emotions and relationships with a brilliantly rendered historical background of McCarthyism and idealistic internationalism. Radiance is an absorbing debut which exquisitely locates unsentimental emotional histories in an America buoyant with post-war consumerism and racked with paranoia”

“The taut artistry of Radiance makes for a highly provocative exploration of American guilt…a searing narrative that offers no easy answers, as it unflinchingly examines the anguish, fury and thwarted redemption of postwar America…. Lambert achieves compelling narrative tension by skillfully creating in Keiko a character who both eludes and submits to the desires of those around her. Keiko is a perpetual question mark who reflects back the inscrutability, exoticism, and passivity her American hosts choose to see in her while keeping her dark, hidden demons at bay.”

“What shines most in Radiance is the integrity and honesty of Lambert’s voice. She writes with an unpretentious, unprissy, highly intelligent and perceptive sensibility that, if it weren’t so uniquely her own, might be a hybrid of Marilynne Robinson and Nadine Gordimer.”

“Radiance, the masterfully realized first novel by Vancouver pet and short story writer, Shaena Lambert is endowed with many virtues, not the least of which is its author’s deftly drawn evocation of that pinched, claustrophobic time (the 1950s)…along the way the novel is studded with literary tours de force.”

“This is an incredibly brave first novel…one that requires a dexterous leap of the imagination into very frightening territory…yet the author’s touch is assured and perfectly paced. She has been likened to Alice Munro, and certainly succeeds in fishing in those murky depths of each character, allowing complexities in the everyday to remain unexplained in order to relate essential, human stories.”

“Masterful…the characters are all compelled by subterranean urges that surface over the course of the book, which is just one reason its complexities are so satisfying. Throw in Lambert’s assured writing, her period details, and her keen grasp of her creations’ psychology, and it’s no wonder Radiance is so gripping.”

“Lambert gets under the skin of all her characters, slowly uncovering their secrets and flaws. In textured prose, they contemplate their humanity (or lack thereof) in the context of the American dream, McCarthyism, and the ever-increasing momentum of nuclear technologies… Radiance shines with moments both horrific and oddly humorous, illustrating the state of 50’s America…A solid, well-crafted debut with a fascinating premise.”

“…This will likely be one of the most popular novels of the year…Radiance is a deceptively quiet novel with the power of a nuclear explosion behind it.”

“Radiance is a book that will hold its appeal long after horror about Hiroshima and fascination with the 50s have faded. And that is as neat as definition as any of a good book.”

“Totally compelling from the first sentence….Daisy might be ordinary, but it turns out she is made of pretty stern stuff, beautifully portrayed in this debut novel…Thoroughly recommended.”

“(Radiance) is an open-ended story that suggests we can strive to reach beyond betrayal and anger to locate the epicentre of compassion.”

FacebookTwitterLinkedInWhatsAppEmail
This website may use cookies to deliver services, such as to identify whether you've filled out a form or not. These do not allow us to access any personal data. Please click OK in order to continue using this website. OK