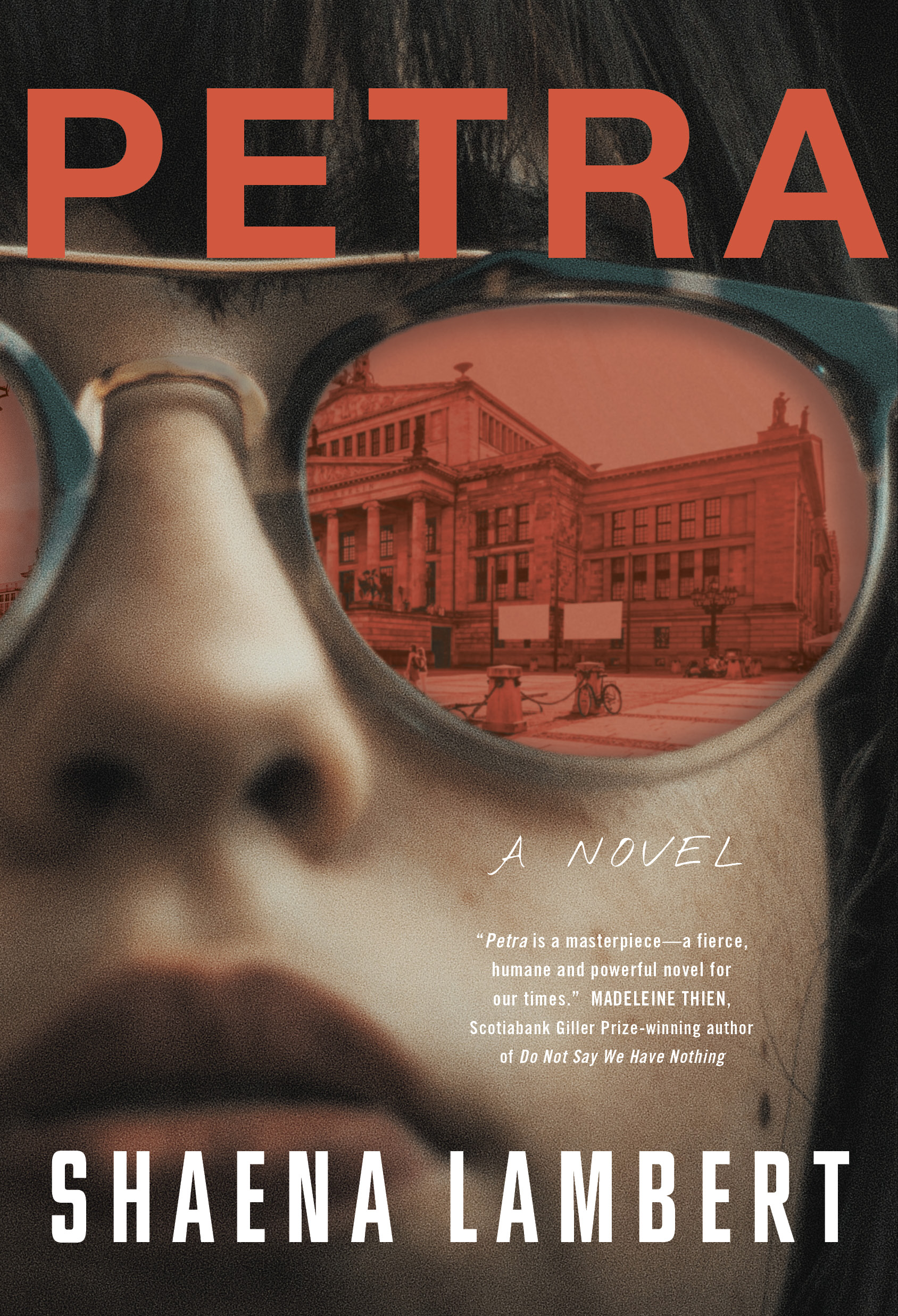 My new novel, Petra, is available now. Buy the paperback from Indigo or Amazon or the ebook from Kobo or Amazon. For a personalized copy, contact Main Street Book Warehouse in Vancouver. Email them or call +1 (604) 879-7737.

The audio book of Petra, directed by Marcia Johnson and narrated by Taylor Price, is available now! Thank you to the entire Penguin Random House Canada audio team!

Here are links to purchase the audio book:

Files are also available through OverDrive, which serves public libraries, so you can now request the audiobook through their local library. If a library doesn’t have a copy, a request from a borrower can spur them on to order the title.

“This is a moving psychological portrait…a murder mystery and a keenly persuasive psychological portrayal of the often-acrimonious inner workings of protest and electoral politics. Lambert’s handling of these disparate elements is unified by her lapidary prose and her wise, compassionate portrayal of her characters’ human fallibility and complexity. It will appeal both to the general reader and to anyone who has ever been involved in movements for peace, justice and environmental sanity. Highly recommended.”

“Award-winning Vancouver author Shaena Lambert’s most recent offering distinguishes her as one of Canada’s most thoughtful current writers.”

“Combining the planetary sweep of Kelly’s political vision with an intimate lens into her ill-fated personal life, Lambert forges a captivating fictional account of an eco-revolutionary’s rise and eventual fall…. While these are weighty themes, what distinguishes Lambert’s writing is her compassion for her characters. At its core, Petra is a very human story about love and betrayal.”

“Petra is a masterpiece – a fierce, humane and powerful novel for our times. Shaena Lambert brings to life the nearly forgotten revolutionary, Petra Kelly, and the circle of activists who transformed environmental and global politics. Petra, the story of generations reckoning with history, sex, the land, guilt, and our troubled future, is at every moment personal and political. What does it mean to remake not only the world but one another, what if our inner morality is riddled with falsehoods, why do we harm in the name of love? Spell-binding and shattering, Petra is a tour de force – a haunting and a courageous awakening.”

—Madeleine Thien, Giller-award winning author of Do Not Say We Have Nothing, and Dogs at the Perimeter.

“Petra by Shaena Lambert is a miracle of a novel, fully imagined and exquisitely written. Petra Kelly herself is incandescent on its pages, as she was in the world. I read her story with deep appreciation for the light it casts on the global fix we’re in.”

“Petra is a brilliantly realized and compelling novel. Shaena Lambert raises historical questions that haunt us all: What is our obligation to the past? And can we build a brighter future by cutting ourselves off from its dark shadow?”

—Wayne Grady, author of Up From Freedom and Emancipation Day

“I am deeply impressed by how the author describes the main character of her novel Petra with piercing empathy from various perspectives, both fictional and real, and seeks to understand and to penetrate to her core.”

—Lukas Beckmann, co-founder of the German Green Party and a close colleague of Petra Kelly

“It’s not just the keenly interesting era, but also that the characters are absolutely alive, the politics complex and subtle, yet so heartfelt and vital, and, because of that, current. It was one of those books that kept me up in the night, and made me eager to return to it – not a lot of fiction does that for me these days.”

—Bill Gaston, author of The Mariner’s Guide to Self-Sabotage and Just Let me Look at You

Inspired by Petra Kelly, the original Green Party leader and political activist who fought for the planet and human rights in 1980s Germany, Shaena Lambert brings us a timely and captivating new novel about a woman who changed history and transformed environmental politics –and who, like many history-changing women, has been largely erased.

January, 1980. At the height of the Cold War in Germany, the charismatic Petra Kelly inspires hundreds of thousands to take to the streets to protest the placement of nuclear missiles on West German soil—including a NATO general named Emil Gerhardt who shocks his wife and his colleagues by converting to the cause. The “General and the Peace Maiden,” as they’re soon called, not only vault to fame as the stars of the Green movement, gaining real political power with their earth-based agenda, but they also fall in love. Then Manfred Schwartz, Petra’s ex-lover urges her to face the true nature of her general, drawing back the curtain on his wartime past. Petra believes in the power of redemption, but soon realizes that Emil’s past threatens not just her love, but her power to forgive. And eventually her life.

Told by Manfred Schwartz from his place in a present world even more beset by existential threats, Petra is an exploration of love, jealousy, and the power of social change. It portrays an age, like our own, on the brink of global disaster, and explores the subtle healing forces we possess, set against those that pitch us deeper into chaos. A woman capable of founding a new and world-changing politics and taking on two superpowers, Petra must still grapple with her own complex nature, and a singular and fatal love.

—from the Random House book jacket

FacebookTwitterLinkedInWhatsAppEmail
This website may use cookies to deliver services, such as to identify whether you've filled out a form or not. These do not allow us to access any personal data. Please click OK in order to continue using this website. OK